As a guest blog, the views expressed in this publication do not necessarily reflect the views of Our Secure Future, One Earth Future, or any particular organization.

On a typical evening in Washington, I attended a private dinner to discuss U.S. foreign policy priorities in Eastern Europe with a reputable think tank. The dinner brought together senior military leaders, diplomats, journalists, and influential people who advise government agencies.

Although it wasn’t the selected topic for discussion, the conversation naturally turned to the war in Ukraine.

I asked the esteemed group, what would it take to change the U.S. relationship with Russia? I then suggested that the U.S. should consider making greater investments in public diplomacy. Citing the example of Samantha Smith, a 10-year-old girl from my home state of Maine who strengthened ties with the USSR by merely writing a letter to the head of the Soviet Union, stating that she did not want Russia and the United States to get into a nuclear war (Haas, DW News, 2022).

Could informal engagement from young activists help end the stalemate in Russian relations with the West? When I asked whether young people like Samantha could help us find something to agree on, one highly respected diplomat suggested that I did not “understand Russia.”

A retired military official said that my suggestion for dialogue was naïve. He intimated that “more weapons” to show a “stronger hand” was the only solution to the war, as if another arms race was imminent.

While I am not a Russia specialist, I am an expert in analyzing the human dimension of conflict (U.S. Army War College, 2021).My suggestion was well thought-out. Diplomacy, not military engagement, brought an end to the Cold War (State Department Historian). The arms race that characterized the Cold War was not sustainable for either nation because there were more pressing issues to deal with on the home front, like stabilizing the economy. Sound familiar?

Defense experts say that the war in Ukraine revealed weaknesses in Russia’s military playbook. Yet, if you count the cost of the war, from the price of gas in America and Europe to the limited availability of food in Sub-Saharan Africa, I think Russia has proved a point.

If Russia’s strategic intent for invading Ukraine was to prove that it is still a world power, and that it maintains control over the Slavic world despite the breakdown of the USSR, then it has achieved its strategic intent. In fact, Russia’s aggression in Ukraine stopped the Biden administration from releasing the U.S. national security strategy earlier this summer, causing it to go back to the drawing board. When considering what to do next, the U.S. should consider the diplomatic and public engagement tools that have deterred Russian aggression in the past. There are a few avenues for cooperation that Western democracies can pursue with Russia, outside of starting a new arms race that will drain the economy.

During the Clinton administration, the U.S. negotiated the Founding Act (State Department, 1997), outlining cooperation between NATO and Russia. The act includes provisions on non-aggression against members of the alliance and regular dialogue on nuclear weapons. The agreement was negotiated as part of clarifying the role of Russia in the Balkan war, which was of great concern to the 16 members of NATO at that time (International Law Studies, Nordquist). When then-President Boris Yeltsin and President Clinton signed the act, they stated that it was a significant step in ending the Cold War (Nordquist).

As a result of the act, NATO formed the NATO-Russia Council as a means of regular dialogue, to strengthen cooperation on a range of issues (NATO Statement 2022). Yet, the initial onset of the Russian invasion of Ukraine in 2014 brought these forums to an end. Despite Russia’s recent aggression, experts at the Atlantic Council caution that the Founding Act “isn’t dead.” At a minimum, it sets a precedent for future cooperation (Foreign Policy, McKinnon 2022).

One option for U.S.-Russia relations, is to re-negotiate the Founding Act, or to re-instate the Russia Council with willing state parties. This time, frontline democracies in Eastern Europe should lead the way. Many of these countries are also led by women (Krishnankutty 2022). 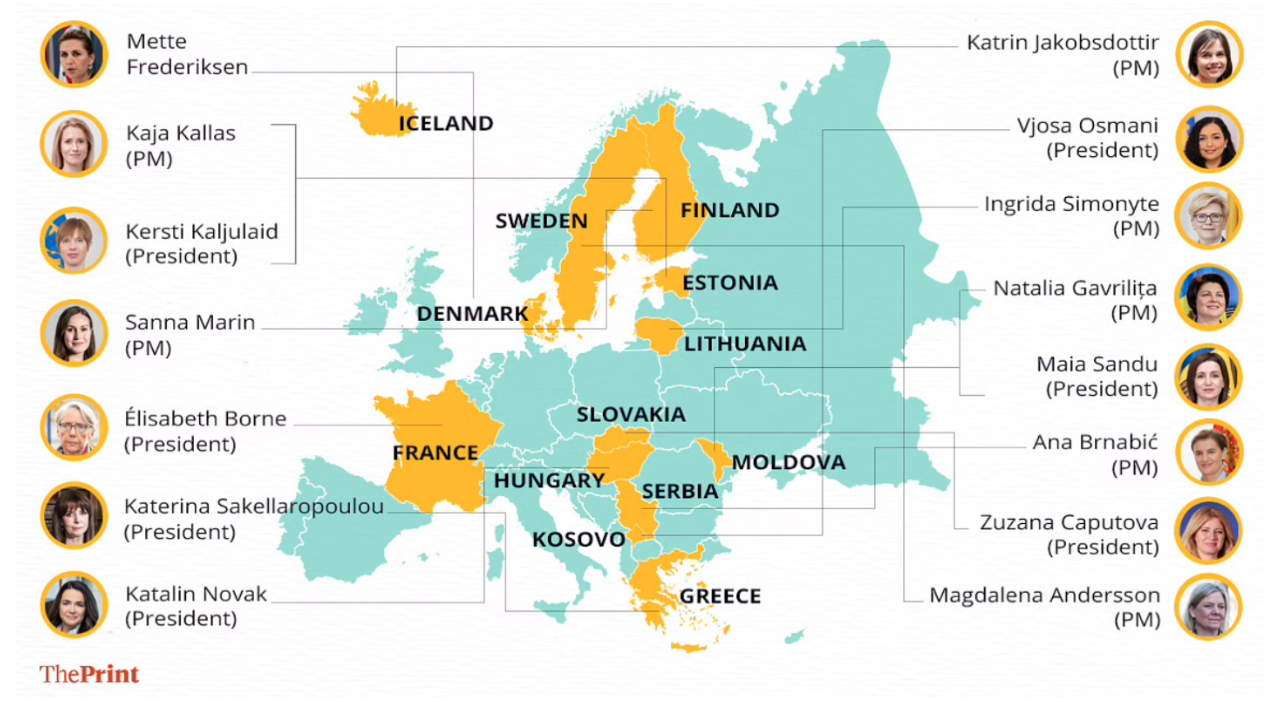 “Map of European countries led by women” (The Print)

Sweden’s first female Prime Minister, Magdalena Andersson, and the Prime Minister of Finland, Sanna Marin, led the way for their countries to become members of NATO earlier this year. Both leaders were heralded as defying Putin by joining the alliance. Far from an act of aggression, Finland and Sweden joined NATO in an act of self-defense to deter aggression.

Putting youth at the center of Public Diplomacy

Prime Minister Andersson became involved in politics at the age of 16, when she joined the Sweden Social Democratic Youth League in 1983. In 1996, at the age of 29, she joined the staff of then-Prime Minister Goran Persson. Her political ascent included rising through the ranks of several ministries before becoming the leader of the Social Democratic Party (BBC 2021).

PM Andersson’s political activity at a young age reminds me of Samantha Smith, the young girl from Maine whose simple letter won the hearts and minds of the Russian people. After Samantha wrote to Yuri Andropov, the head of the Soviet Union at the time, he invited her to visit the country.

In 1983, she packed her bags for Moscow. At 10 years old, she became known as “America’s youngest ambassador” (Haas, DW News, 2022). In media interviews, Smith suggested the leaders of the USSR send their granddaughters to the U.S. because, who would want to bomb a country their family was visiting?

Although some claimed that Smith’s visit to the USSR was used as a prop that distracted people from “real politiks,” her goodwill efforts made it harder for the confrontation to escalate. Smith died in a plane crash at the age of 13 as an icon of peace. Her youthful idealism inspired the nation to consider Russia as more than an enemy.

The choice between supporting public diplomacy and providing weapons to deter Russian aggression is not an “either, or” foreign policy decision. Rather, supporting civil society engagement should be a “both, and” proposition to change the course of U.S.-Russia relations.

Since the start of the war, U.S. and European policy has focused on punishing Russia for bad behavior. Economic sanctions and private sector withdrawal from capital investments has been a hallmark of transatlantic policy toward Russia. In these times of great power competition, official foreign policy must consider the military, political, and social dimensions of a conflict.

What if we took a different approach? What if women leaders in Eastern Europe re-negotiated the Founding Act? What if we increased public, educational, and social ties with young activists?

When I worked in Ukraine, it was clear that one of Russia’s tactics was to influence the eastern territories by “offering” educational and sports opportunities for young people. Russian proxy forces lured young men and women into joining militaristic youth groups and social clubs that gave them a chance to study at universities or compete at sporting events in Moscow. Russia has invested time and money into changing the identity of Ukrainian youth (Our Secure Future).

Today, Russia has gone even further by forcibly displacing Ukrainian people from their homes in a practice known as “filtration.” Russia is deporting Ukrainians to several locations where they are interrogated or imprisoned, in places as far away as Serbia (U.S. Department of National Intelligence).

Intelligence experts say that the U.S. should counter Russian aggression with psychological warfare (Politico 2022). Is this the way to win over the “hearts and minds” of Russian people? A recent poll by the Carnegie Institute showed that support for the war is waning, with the greatest level of support for Putin coming from male hardliners between the ages of 45-50 (Washington Post 2022).

What do Russian women have to say about the war? News outlets have focused on the voices of Russian mothers who want their sons to come home from the frontlines. Is that all there is to the story?

Are there Russian women such as Elvira Nabiullina, the head of the Central Bank, who can negotiate with the West from a position of power? Intelligence analysts say that Nabiullina is the “only woman that Putin fears.” Nabiullina tried to step down from her post when sanctions hit the economy, but Putin refused to let her resign (Bloomberg News 2022).

What would female leaders in Russia and Europe have to say, if they could negotiate directly? Could we find a sensible way to cooperate on our shared economic priorities?

When a girl at the age of ten from the state of Maine can write a letter that changes the course of the Cold War, and when Russia is luring youth from the Donbas region to join its military and relocating civilians from Mariupol to Serbia to change their identity, we see clearly that the conflict has a gendered, social dynamic.

The U.S. can demonstrate that it is aware of these dynamics by engaging female leaders in Europe and Russia, and by placing youth at the center of public diplomacy. The new generation that is looking for models of democracy beyond America, and the women in power who worked hard to achieve economic and political gains, will reduce the influence of hardliners in due time. The question is, will we be ready to work with them once they rise?