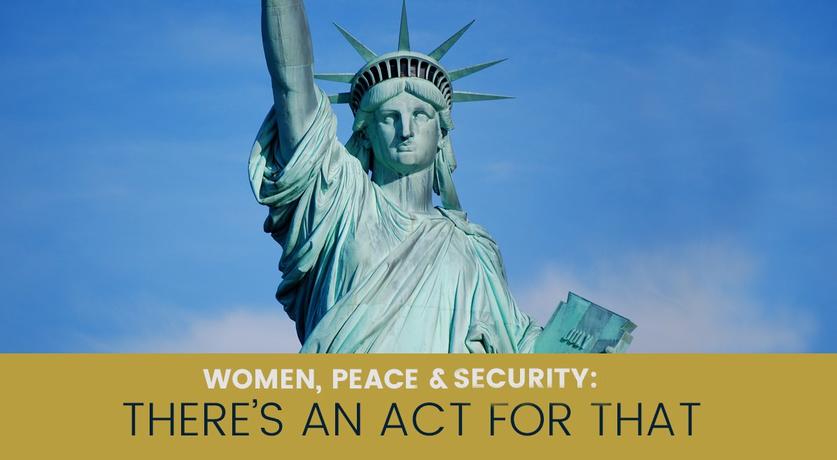 As of October 2017, the United States has domestic legislation that mandates women’s full and equal participation in peace and security issues. Learn how to hack this new law to support WPS more broadly.

In October 2017, the US Congress and the President officially passed the Women, Peace, and Security Act. The law is a major milestone in recognizing the link between gender equality and the security of states. Now that we have a law that mandates women’s meaningful participation in international peace and security, questions arise about where it came from, what it requires, and why it matters.

In the third installment of this three-part blog series, we give you the basics on how to leverage this new Act in support of the WPS agenda. The following three micro-hacks are a great starting point for anyone who wants to be more involved.

As we discussed in Part II of this series, training is a main component of the Act. As a result, there will be an increasing demand for lessons learned from current and previous efforts to implement the WPS agenda. A great starting point is to look at how women’s participation has impacted peace negotiations in Afghanistan, how women were instrumental in changing the laws of war in the Former Yugoslavia, and how women’s political participation also helped transform the Middle East—as highlighted in the Trials of Spring.

But how can the average person or policymaker learn more about WPS outside the classroom?

Start by watching Peace is Loud’s Women, War and Peace series to learn about how women organized for peace around the world.  Also, ask yourself “What is different about the way women perceive and experience security and peace?”

The Act requires reports from the President and the Secretaries of Defense, State, and USAID, on the progress the US is making towards promoting women’s participation in international security and peace efforts. The law also allows US citizens to request information on the progress that federal agencies and their congressional members are making to implement this law. Revisit Part I of this blog series to see which Senators and Representatives were particularly supportive of the law, or check out your own representatives’ websites for more information.

Traditional security narratives often focus on the protection of blood and treasure, using hard security tactics. WPS changes the security narrative by asking what security means to you, as an individual. This is because UNSCR 1325 on Women, Peace and Security was the first time that the international community recognized that individual security is as important as state security. It recognizes that security equality, and equality between men and women are as important to creating a peaceful world as protecting state territory and interests with military solutions.

A great place to begin changing your own narrative is with this micro hack offered in our "Back to Basics" series. It encourages our readers to think about how they define security, how they might do so differently than their family and friends, and how that might differ from their ideas about state security. Thanks to the WPS Act, that hack just became applicable all the way up to the highest echelons of US defense and security decision-making.