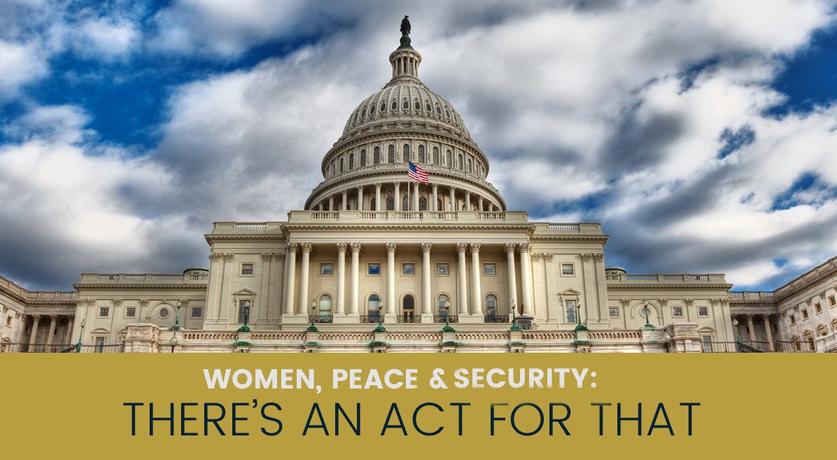 As of October 2017, the United States has domestic legislation that mandates women’s full and equal participation in peace and security issues. In the first of this three-part series, we highlight the events that led to the new Act's passing.

In October 2017, the US Congress, and the President, officially passed the Women, Peace, and Security Act. The law is a major milestone in recognizing the link between gender equality and the security of states. Now that we have a law that mandates women’s meaningful participation in international peace and security, questions arise about where it came from, what it requires, and why it matters.

PART I: HISTORY AND BACKGROUND

In the first installment of this three-part series, we give you the basics on the origins of this new and important legislation. Here is some background on who initiated the act, what other countries have similar laws, and how it received bipartisan support in the US Congress.

1. Who initiated the Women, Peace, and Security Act in the United States?

The Women, Peace, and Security Act was initiated by a coalition of NGOs, working together under the umbrella of the United States Civil Society Working Group (US CSWG). A small sub-set of US CSWG members took the initiative to partner with congressional members and champion the WPS agenda.

The formal concept of Women, Peace and Security (WPS) originates from United Nations Security Council Resolution (UNSCR) 1325, which calls for women’s full and meaningful participation and the universal recognition that conflict affects women, men, girls, and boys very differently. UNSCR 1325 was drafted and championed by women and was passed unanimously under Chapter VI of the UN Charter. Countries can implement UNSCR 1325 either through policy commitments or through legal obligations. Policy commitments can take the form of National Actions Plans (NAPs), and legal obligations may take the form of domestic law (or in the case of the US, the WPS Act).  As of November of 2017, over 70 countries have adopted NAPs to ensure the meaningful participation of women in international peace and security decision-making. In December 2011, President Barack Obama issued Executive Order 13595 establishing the US NAP on Women, Peace and Security, detailing the commitments of the Department of State, Department of Defense, USAID, and other relevant federal agencies.

2. When was the Women, Peace, and Security Act introduced?

After the US NAP came into effect, the first iteration of the WPS Act was introduced by the 112th Congress with bipartisan support in both the House of Representatives and the Senate, in July 2012. The Act was then revised and re-introduced to both the House and the Senate during the 113th Congress (2013-2014), and was re-introduced in the Senate again during the 114th Congress (2015-2016). The bill was sponsored in the House of Representatives by Rep. Jan Schakowsky (D-IL), Rep. Kristi Noem (R-SD), Rep. Eliot Engel (D-NY), Rep. Ed Royce (R-CA). In the Senate, the bill was sponsored by Sen. Jeanne Shaheen (D-NH), Sen. Shelley Moore Capito (R-WV), Sen. Marco Rubio (R-FL), Sen. Christopher A. Coons (D-DE), Sen. Benjamin L. Cardin (D-MD).

The most recent version, S. 1141, informally titled the “Women, Peace, and Security Act of 2017,” (which, once passed, became Public Law No: 115-68), passed in October of 2017, and ensures that Women, Peace and Security will be a core principle of the US national security strategy and provides the US NAP with legislative authority. The Act passed without objection, and has enjoyed full bipartisan support from many congressional members, including Senators Barbara Boxer (D-CA), Mark Kirk (R-IL), and Ben Cardin (D-MD), and Representatives Niki Tsongas (R-NY), and Mike Honda (D-CA), in addition to those listed above.

3. What other countries have legal WPS obligations in the form of legislation?

Besides the US, Israel is the only other country that has a domestic law that focuses on Women, Peace and Security. Amendment 6C of Israel’s Women’s Equal Rights Law (1951), as amended, even includes language about implementing UNSCR 1325.

Just for fun, check out this 1975 throwback, “I’m Just a Bill,” from a Schoolhouse Rock! segment:

Watch this space: next week we’ll be sharing insights into what the law mandates and why it matters for the WPS agenda!