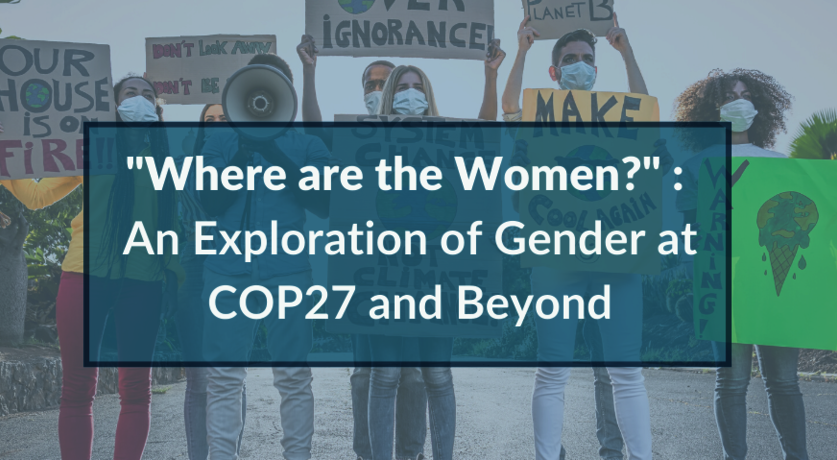 A discussion of gender and climate change at the recent COP27 and how to move forward.

On November 7th, leaders from 110 countries gathered to commemorate the start of the 27th annual United Nations Climate Change Conference, or Conference of Parties to the UNFCCC (COP) in Sharm El Sheikh, Egypt with a ‘family photo.’ However, something was noticeably absent. Where, many questioned as the photo circulated, are the women?

Equity, representation, and justice were at the forefront of COP discussions this year. Dubbed the “African COP,” the jarring reality that the continent is only responsible for 3% of global emissions but has been disproportionately impacted by the climate emergency, was brought into sharp focus - a salient starting point for discussions around intersecting disparities exacerbated by the climate emergency and unequal representation of those most marginalized at ‘high-level’ discussions.

Women and girls are particularly vulnerable to the compounding effects of climate disasters, yet remain underrepresented at the highest echelons of climate decision-making. Many women are responsible for feeding their families and collecting drinking water, but due to rising rates of drought and famine, they are forced to seek out water and food sources from miles away, curtailing education and livelihood opportunities. Women’s health, bodily autonomy, and well-being are significantly at risk. Women and girls make up  80% of persons displaced by climate-related disasters and are 14x more likely to die in those crises. Displacement and loss of land and livelihoods increase stress and instability in households and communities, heightening the risk of intimate partner and sexual and gender-based violence.

Just as the climate emergency is a multiplier of other global inequalities, a more inclusive, gender-responsive, rights-based approach can be a “solution multiplier.” As women are at the forefront of the climate crisis, they are also spearheading grassroots, sustainable practices, and solutions in local and global contexts. Research confirms a positive correlation between women's political empowerment and better climate outcomes. The need to treat women as equal stakeholders and leaders in creating a more sustainable world is increasingly recognized in climate-related research, policy, and discussions. However, despite language encoded in policy, gender is not necessarily part of the mainstream dialogue at these ‘high-level discussions.’ A UN Women big data analysis of 201 speeches from the COPs 24-26 found only 16% (32) mentioned keywords related to gender. Of 110 world leaders present at COP27, only 7 were women.

How did these dynamics play out at COP27? Was gender discussed? What were the outcomes, if any, of the discussions? What are areas of growth in gender equity, and where progress is still needed?

History of Gender at COP -  Existing Policy and Frameworks

‘Gender’ was largely absent from early COP agendas. When the first COP convened in 1996, the average delegation was 88% male and 12% female. It wasn’t until COP7 in 2001, that the first ‘gender-related decision’ was made in an effort to bolster women’s representation and participation in the decision-making processes. In 2012, UNFCCC bodies added a standalone “gender balance goal” to the agenda. In 2014, the Lima Work Programme on Gender implemented a 2-year Gender Action Plan, which was extended in 2016. The landmark 2015 Paris Agreement, an outcome of COP21, includes a preamble on gender equality and calls for gender-responsive adaption and capacity building. In 2020, an Enhanced Lima Work Programme on Gender and the Gender Action Plan was put forth. The International Panel on Climate Change (IPCC) Sixth Assessment Report focused extensively on gender-related aspects of climate change and climate justice - highlighting the link between gender equity and human rights more broadly.

Since 2001, there have been over 80 gender-related climate mandates, and the percentage of females in delegations has tripled. A BBC analysis of COP27 found that 34% of negotiators were female - an improvement from COP’s initial years, but falling short of 2018 40% representation. As gender is increasingly at the forefront of climate agendas, the discussions have slowly shifted from a focus on women’s representation at conferences, and women simply as victims of climate change, towards a more nuanced and intersectional understanding that looks at the gendered impacts of climate crises more broadly, and women’s agency as leaders and changemakers in the fight against climate change - a sentiment reflected at COP27.

The most discussed - and most contentious - topics at COP27 were climate finance and loss and damage. Developing and small island nations have long demanded loss and damage reparations to shore the financial, physical, and technical costs of climate destruction (caused by industrialization and high carbon emissions of wealthy countries) that cannot be avoided by adaption or mitigation. Demand for climate justice and gender justice does not exist in a vacuum. A new report reveals climate policies and Nationally Determined Contributions (NDC) of G20 countries - who are responsible for 80% of global carbon emissions - lack meaningful acknowledgment and action on gender-related impacts and solutions. The intertwined nature of these issues was highlighted during discussions.

November 14th was ‘Gender Day,’ which included 11 gender-focused events. Opening remarks highlight both the disproportionate impact of climate change on women and girls and the critical need to better integrate women as leaders and agents of change into decision-making processes. The Gender Action Plan was revised, though civil society leaders noted a lack of measurable progress from last year's COP, and called for gender-transformative climate finance, directed toward grassroots and indigenous women-led and climate-focused women’s rights organizations.

When given a platform, women’s voices were loud and clear - amplifying disavowal of systemic injustice of climate governance as it stands and advocating for sustainable solutions rooted in human rights and justice. Barbadian President Mia Mottley is at the forefront of the climate justice movement. Young female activists like Vanessa Nakate and Ayisha Siddiqa held world leaders accountable for divesting from fossil fuels and implementing equitable solutions. Despite being underrepresented in most other spaces at COP, female negotiators led the talks on the toughest and most important topic addressed - loss and damage reparations. Chilean Environment Minister Maisa Rojas and German special climate envoy Jennifer Morgan facilitated the deal that got ‘loss and damage’ on the COP agenda for the first time ever.

COP concluded on November 20th. The “breakthrough agreement” of the two-week talks was the establishment of a dedicated ‘loss and damage’ fund for vulnerable countries. This landmark decision would not have moved forward without the work of both female activists and advocates within ‘high-level’ decision-making spaces who put ‘loss and damage’ on the agenda in the first place. The “Sharm el Sheikh Implementation Plan” has two mentions of women, acknowledges the need for equitable and rights-based climate solutions, and calls on parties “to increase the full and meaningful participation in climate action,” adhere to the Lima work programme on gender and support the implementation of the Gender Action Plan.

When thinking about just and sustainable steps towards a green future, it is important to consider if they are just and sustainable for all. A gender-responsive approach can shed light on all persons who might be excluded from mainstream approaches to green energy, climate finance, and loss and damage allocation. First and foremost, there is a lack of gender-disaggregated data in climate research that many policies and solutions are based on. Green energy and agrotech sectors are dominated by men and remain difficult for women to access due to socioeconomic, cultural, and political barriers to STEM education and resources. Only a small amount of climate finance programs flows to women and women-led initiatives and  0.01% of funding worldwide supports projects that address climate and women’s rights. In turn, climate mitigation strategies and infrastructure have overlooked specific gender and cultural dimensions - resulting in ultimately unsuccessful projects. For example, due to a lack of adequate consultation and the inclusion of women in the community, a solar-powered cooking stove project in Sub-Saharan Africa failed to take off because the stoves took too long to cook and did not meet the needs of those primarily responsible for cooking.

It is clear that, for leaders, institutions, and private and public sector actors participating at COP27, ‘gender’ still equals women. While is it imperative to draw attention to the unique insecurities women and girls face due to climate change, framing gender issues as solely ‘women’s issues’ obscures more systemic power relations and vulnerabilities that men face due to gendered norms and expectations. Furthermore, gender-responsive climate strategies that don’t consider the needs of men can isolate men from conversation and activism, at times leading to an increase in domestic violence. If discussions and events related to gender justice continue to be relegated to the sidelines without men’s active participation and buy-in, then it will be challenging for policies to be translated into common practice.

There has been notable progress in adopting a gender approach to climate and increasing women’s participation and representation in climate-related decision-making over the past 20 years. However, there is still a long way to go to ensure that gender equity and human rights are included at every step of sustainable climate adaptation and mitigation - from data collection, design, building, and implementation, to local, national, and global leadership. Though COP is an important platform for global stakeholders to address issues that require a global response, it is been increasingly criticized for preventing full and equal participation of more marginalized groups, tokenism, ‘youth-washing,’ and prioritizing private, short-term interests. Women and girls, indigenous communities, and citizens of the global south in particular are at the forefront of creative activism and leadership in effecting, pressuring, and implementing change outside of COP and other governing bodies. It is essential that their voices and solutions are given equal weight within, and beyond traditional institutions, as we tackle the climate emergency.