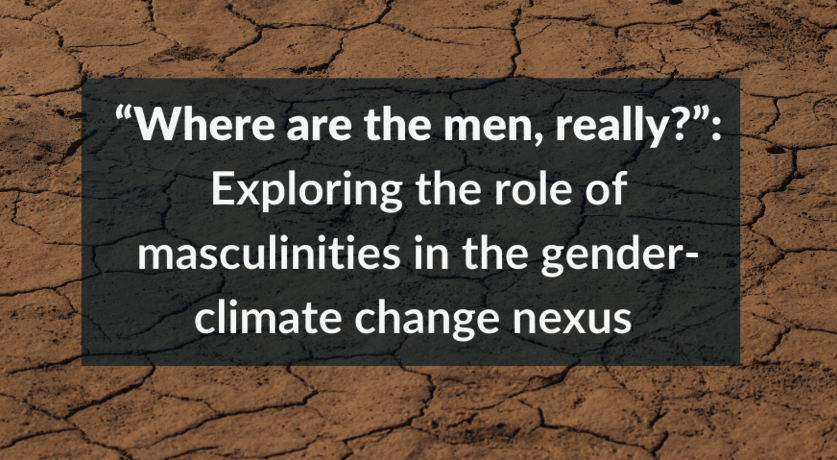 This blog piece explores the role masculinities play in contributing to, suffering from and responding to climate change, a concept crucial for evolving truly gender equitable strategies to climate resilience across the world.

When considering the linkage between two of the worst crises confronting the world today, gender inequity and climate change, the focus invariably falls on one group: women. It is well-established that women bear disproportionate burdens of climate disasters: increased caregiving responsibilities, vulnerability to gender-based violence, greater loss of income and reduced opportunities for education and employment. Women are however, too often portrayed as helpless victims and men as the sole perpetrators of climate change; which itself creates and perpetuates gendered stereotypes and overlooks intersectionalities among the genders, essentializing all men and all women into binary categories without individual agency. This piece will explore the role masculinities play in contributing to, suffering from and responding to climate change, a concept crucial for evolving truly gender equitable strategies to climate resilience across the world.

A leading researcher and scholar on masculinities, Connell, defines masculinities as “normative practices and ideals through which men and women engage in social relations”, or the practices and behaviors that define what it is to be a man in a given society. Masculinities vary across class, race, ethnicity, culture, age, religion and societies: they are multiple and dynamic. Masculinities on their own do not create patriarchal systems; it is ‘hegemonic masculinities’, the archetype of the ideal man: aggressive, dominating, invulnerable, which have particular relevance to the discussion on climate change. These hegemonic masculinities influence both actions that lead to climate change and men’s responses to its consequences.

In many societies, masculinity is often manifested in the form of control, over assets, resources, women and the environment. Industrialization, which has contributed to the vast majority of climate change, has been run by male-dominated systems; further, men also make up most of the decision-makers regarding the environment and natural resource administration. The societally masculine emphasis on scientific, hard security solutions prevents consideration of human security concerns- policies frequently do not take account of women, men and gender and sexual minorities’ heightened vulnerabilities to climate change.

The gendered division of labor, along with social norms which dictate the role of men as providers and protectors, are acutely threatened with rising droughts, floods and other disasters leading to decline in landholdings and mass displacement. Recent studies have found that inability to fulfill breadwinner roles cause many men to experience hopelessness, increased aggression and insecurity. Such negative emotions, in turn, lead to displays of violence, substance abuse and severe stress. With loss in income opportunities for men, women often have to take up paid work, a phenomenon which while empowering, also creates new dangers in the form of domestic violence.

To illustrate, in Greenland, melting arctic ice and decline in biodiversity have reduced hunting opportunities for men; this consequence has altered gender relations, with a concomitant rise in gender-based violence against women and reckless behavior among men. In Peru, steady drops in fish stocks have caused loss of livelihoods for traditional fishing communities (male); alcohol abuse and unsafe sex practices with multiple partners have been reoprted, indicating unhealthy coping strategies as a result of thwarted ideals of manhood in Peruvian society.

What about the women?

It is worth noting here that masculinities are not male constructions; they emerge from interactions between women, men and gender and sexual minorities to influence societally ‘valued’ male behaviors. Women often encourage and reinforce harmful masculinities through motherhood techniques and dissemination of cultural codes. For example, young men in Sudan are encouraged to raid cattle as a rite of passage towards attaining manhood, while men in Ghana are expected to engage in illegal mining, often with drastic environmental consequences, as a cultural proof of their ability to provide for their families.

Few, if any, climate adaptation plans refer to the specific vulnerabilities faced by men with reference to climate change. The equation of ‘gender integration’ with solely women does women more harm than good; by omitting a crucial gendered group, any mitigation strategies are incomplete and risk perpetuating unequal gender impacts of environmental phenomena. The following are some steps that could prove useful in creating more gender equitable plans: 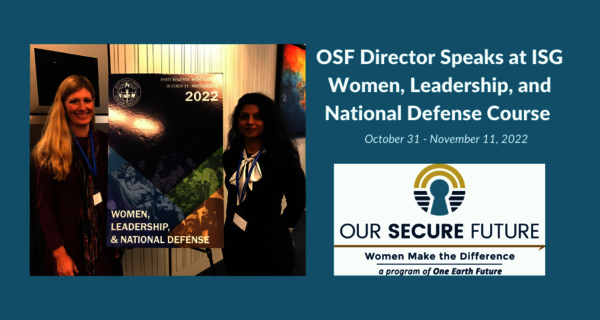