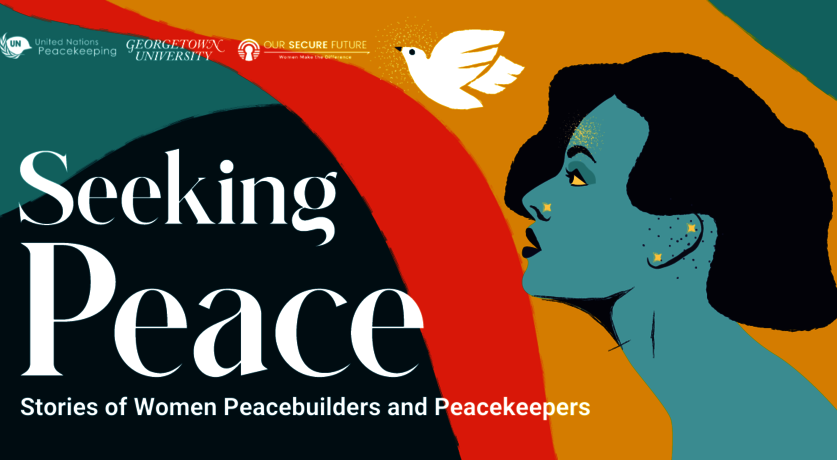 The Georgetown Institute for Women, Peace and Security (GIWPS), in partnership with Our Secure Future (OSF) and the United Nations Department of Peacekeeping Operations, released season three of the Seeking Peace podcast.

On October 24th, 2022, the Georgetown Institute for Women, Peace and Security (GIWPS), in partnership with Our Secure Future (OSF) and the United Nations Department of Peacekeeping Operations, released the third season of its Seeking Peace podcast. The series is hosted by Amb. Melanne Verveer, Executive Director of GIWPS and the first U.S. Ambassador for Global Women’s Issues.

Each episode features voices of women peacebuilders, peacemakers, and peacekeepers in conflict-affected countries who advocate for their full, equal, and meaningful participation in peace and political processes. Through this partnership, OSF works to amplify gender perspectives in peacemaking and security processes.

The first episode of season three features Anny Tengamendite Modi, a gender activist, women’s rights defender, and expert on women’s leadership development from the Democratic Republic of the Congo (DRC). As a child, she was displaced from her home in central DRC when war soon broke out and put a strain on resources. Ms. Modi states, “this is why I’m very much attached to the work on sexual and reproductive health and rights… because I went through the difficult situation of [being] a teenager who did not have access to pads, for instance, or information to sexual health and rights.” Soon after the birth of her daughter, Ms. Modi started her work as being “a voice for the voiceless.” She founded and became the executive director of Afia Mama, an organization dedicated to women’s sexual and reproductive health and rights to improve their wellbeing.

The second episode explores women’s roles in peace negotiations. This episode features UN Assistant Secretary General for Africa, Martha Ama Akyaa Pobee. Ms. Pobee oversees the six ongoing UN peacekeeping operations taking place on the continent. She states that if women are not involved in peace negotiations, there tends to be more of a militaristic approach than a human security approach. Research shows that when women are involved, there are better security results; “According to a global study on the implementation of United Nations Security Council Resolution 1325, women’s participation increases probability of a peace agreement lasting up to 15 years,” states Amb. Verveer.

The third episode focuses on women’s participation in politics. One of the featured guests in this episode is Mireille Laurier Affa'A Mindzie, the Senior Gender Advisor for the United Nations Organization Stabilization Mission in the Democratic Republic of the Congo (MONUSCO). She states, “when women are involved, they often tend to bring issues that are not generally discussed among male politicians.” However, Ms. Mindzie discusses the hesitance that some women face entering politics, due to the threats of violence towards women politicians.

A component of OSF’s research on the digital ecosystem is the online harassment that women in politics receive. An OSF and Foreign Policy report found that, “Numerous women have abandoned their political leadership aspirations out of fear for their own and their family’s safety… the Interparliamentary Union survey found that three in five women believe that the main goal of such online harassment is to dissuade them from political participation.”

The episode also features Beatrice Epaye, a politician and educator in the Central African Republic, where there are 17 women out of 140 deputies in parliament. She helped to create the Forum of Women Parliamentarians to help vote in gender-sensitive laws and bolster women’s participation. She discusses the need for more gender-sensitive laws to combat the violence against women in politics.

Seeking Peace aims to explore and amplify the global impact that women have on peace and governance. Amplifying women’s voices and strengthening the global network of women peacebuilders is an integral part of OSF’s work and the Women, Peace and Security movement. Elevating the work of women highlights their essential roles in conflict prevention, conflict resolution, and sustaining peace. As Martha Pobee puts it, “It is most critical that we have women actively participating in politics, actively participating in peace operations because, first of all, women hold up half the sky.”

Past seasons of the podcast have featured actor Kristen Bell, Black Lives Matter co-founder Opal Tometi, and former Secretary of State Hillary Clinton. Tune into your podcast provider to hear all of the Seeking Peace episodes.