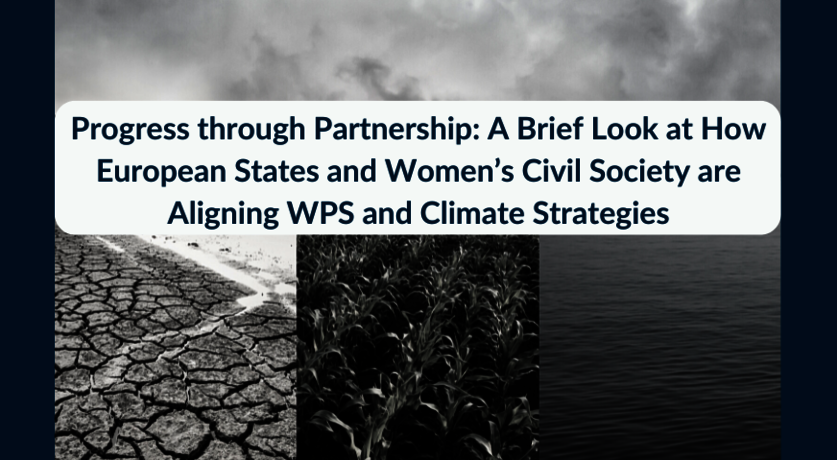 The defining challenge of our time is climate change. As governments and civil society alike look to plan and act to both mitigate and adapt to climate change, Our Secure Future (OSF) has remained engaged in examining countries that are looking to align these strategies with the WPS agenda. In an effort to see how well this strategic planning is aligning, OSF compared texts from WPS National Action Plans (NAPs) concerning climate change to the texts of climate change national plans concerning women or gender. As a prelude to a longer forthcoming brief on this topic focused on Africa, this blog is focused on Europe as it offers a large number of case study countries.

When reviewing these texts concerning climate, OSF’s findings revealed that women were generally characterized in two ways. Texts either acknowledged the impact, including often differentiated impact, of climate change on women or proposed addressing gendered needs as related to climate change. Some included both. In looking at the European states who possess WPS NAPS, those that solely acknowledged the impact of climate change on women included Bosnia and Herzegovina, Italy, the Netherlands, Norway, and Spain. Those that referred to addressing gender in climate change response included Armenia, Bulgaria, Estonia, Finland, Latvia, Montenegro, and Slovenia. Those that held both included Croatia, Denmark, and Germany.

What matters more than these text findings, however, is whether this broader strategic language is being translated into positive, tangible results.  Analyzing these results is a worthwhile effort for the international community to understand its progress and opportunities for growth on aligning climate focused and WPS goals. One attribute that stood out in OSF’s brief review is that governments and civil society have room for growth in improving partnerships towards achieving these strategies. In their WPS NAP, Estonia laid out the need to “support the involvement of women and women’s NGOs.” Armenia likewise emphasized the need to “promote programmes aimed at ensuring the involvement of women in economic, social, educational and environmental spheres.” Across Italy, Germany, Spain, Bulgaria, Armenia, and the Netherlands, many women’s civil society groups are working diligently to advance both climate justice and the WPS agenda in partnership and independently from their governments. Yet it appears that for the most part, governments and civil society are working on parallel but separate tracks. Better unification of efforts between civil society, governments, and the WPS and climate agendas would improve meaningful results for all.