As the United States surpasses a decade of WPS policies since the Obama Administration launched the first U.S. National Action Plan (NAP) on WPS in December 2011, it is important to take stock of the monumental legislative and executive actions on WPS since.

Our Secure Future (OSF) published a policy brief outlining the main developments and changes for Women, Peace and Security (WPS) between the Trump and Biden Administrations. The key changes and developments outlined in the brief have implications for U.S. efforts on WPS moving forward.

The original 2011 NAP was followed by a robust, updated NAP under the Obama Administration in June 2016, aiming to “empower half the world’s population as equal partners in preventing conflict and building peace in countries threatened and affected by war, violence, and insecurity.” Following the requirements of the Women, Peace and Security Act of 2017, the Trump Administration released the first “United States Strategy on Women, Peace and Security” in June 2019. Its three strategic objectives, which would be measured by 2023, were that:

1)Women are more prepared and increasingly able to participate in efforts that promote stable and lasting peace,

2) Women and girls are safer, better protected, and have equal access to government and private assistance programs, and

3) The United States and partner governments have improved institutionalization and capacity to ensure WPS efforts are sustainable and long-lasting.

The Trump White House subsequently released the 2019 “Women, Peace and Security Strategy: Metrics and Milestones,” document, defining interagency achievement goals. The Department of State, USAID, Department of Defense, and Department of Homeland Security released their own specific strategies in accordance with the WPS Act and broader national strategy. Many of the metrics outlined were quantitative, counting the number of U.S. public servants or foreign partners taking training, number of women participants in roles or positions influencing peace efforts, and amount of funding allocated. The metrics were also heavily focused on counting the number of engagements, high level meetings, and individuals responsible for strategy implementation, as opposed to the results of such meetings and engagements.

The Trump-era WPS-related documents have not been formally rescinded, changed or replaced by the Biden Administration, but continue to be operational. In June 2021, the new Administration submitted the first WPS Congressional Report to Congress (required by the WPS Act) outlining implementation and progress on the four lines of effort contained in the 2019 WPS Strategy. (Read OSF’s Blog on the Report here.) The report deferred most specific numerical data to the FY 2021 report, but included results for select interagency milestones and metrics, contained in the following chart: 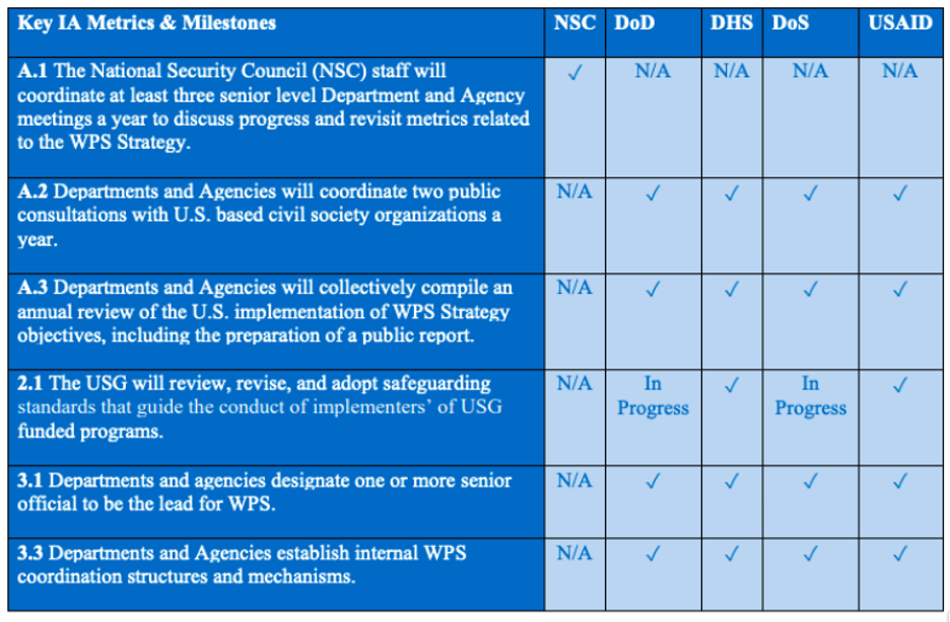 The Biden Administration has rolled out other far-reaching strategies with broad mandates aligned with gender equity and equality. This includes President Biden’s Executive Order on the Establishment of the White House Gender Policy Council (E.O. 14020) in March 2021 which required the development of a “Government-Wide Strategy to Advance Gender Equity and Equality, (NGS).” The National Strategy on Gender Equity and Equality was released on October 22, 2021. E.O. 14020 does not mention WPS specifically, but it is included in several of the policy priority areas.

These national strategies have all emphasized a whole of government approach, yet deferred many specifics to an agency by agency level. Each WPS Agency’s Implementation Plan has also been very ‘self-contained,’ monitored and implemented by each agency.  Many of these strategic documents have emphasized the novel nature of these policies, concluding that WPS strategies and metrics will need to be evolved and adapted from “lessons learned” and ongoing innovations in the field.

The enduring 2019 WPS Strategy defines the word “meaningful” as “having a measurable, enduring impact on one or all of the identified strategic objectives, and in one or all phases of conflict or crisis prevention and resolution.” As the Strategy nears its objective achievement date of 2023 and as relevant WPS agencies simultaneously work on Action Plans in support of the Biden administration’s NGS, a decade offers a relevant window to review the effectiveness of current metrics and measure how “meaningful” policy efforts on WPS have been thus far.

Read the full brief here: From the Trump to the Biden Administration: The Women, Peace and Security Agenda