Background on the Conflict in Yemen

Conflict in Yemen broke out in 2011, following the country’s failed political transition after the Arab Spring. Longtime authoritarian President Ali Abdullah Saleh was forced to relinquish his power to Vice President Abdrabbuh Mansour Hadi. Conflict escalated in March 2015, and war was declared between an alliance of security forces and Houthi Shia militia loyal to Mr. Saleh and President Hadi’s new government.

Since that time, over 6,800 civilians have been killed and at least another 10,700 injured. It is said that 75 percent of the population requires humanitarian assistance, with a high risk of starvation and acute malnutrition among those affected. Over 5 million Yemeni citizens have been displaced. Multiple UN efforts to secure a peace deal have failed—and also failed to include women.

Women are known for their ability to bridge divides and have shown an aptitude for building peace coalitions and compromises among opposing sides to conflict. Women’s request to be included in Yemen’s talks need to be met not only for the sake of human rights but for the success of negotiations and sustained peace.

In December 2018, six Yemeni human rights organizations under the umbrella of the Yemeni Women’s Solidarity Network partnered with the Women’s International League for Peace and Freedom to draft recommendations for the UPR. Their full list was released in the report Changes Ahead: Yemeni Women Map the Road to Peace.

Where Are the Women? 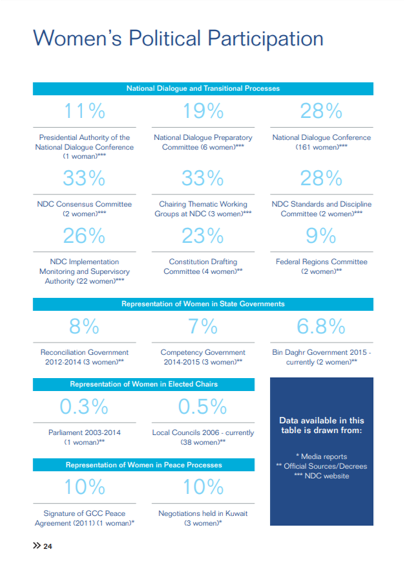 Peace processes have thus far failed to substantially include women’s perspectives. Frequently, there is only one woman at the table, which puts undue pressure on lone female representatives to speak to the needs of all Yemeni women. The one woman delegate to UN-backed talks in December 2018, Rana Ghanem remarked, “As the only woman among the delegates, I feel that I have to carry a lot of responsibilities, including the status and situation of women.”

Outside of formal peace processes, women have pressed for greater inclusion in the talks. On the sidelines, the Yemeni Women’s Technical Advisory Team, which represents a multitude of political parties, civil society organizations, and activists, held meetings with rival parties and diplomats.

Yemeni women continue to press for their full representation in this process, a goal that partially motivated the publication of Changes Ahead. The report lists several recommendations to parties of the conflict in Yemen and to the Yemeni government (listed below):

All parties to the conflict in Yemen must:

The government of Yemen must:

Infographic from Changes Ahead: Yemeni Women Map the Road to Peace.