The release of the 2018 Global Corruption Perceptions Index (GCPI) marked the report’s twenty-fourth anniversary. While this data set provides a summary of corruption globally, women continue to be missing from the analysis. The index scores countries on the basis of their perceived levels of public sector corruption according to experts and business people but fails to include a gendered component. 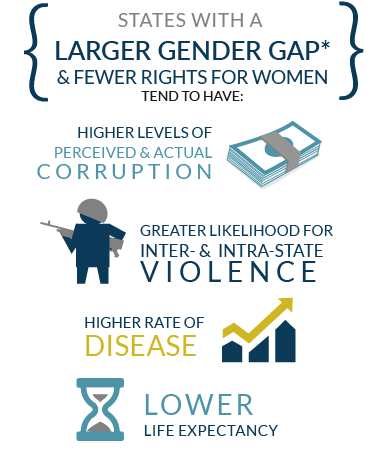 So, why is women’s inclusion so essential to combatting corruption? The main—and most immediate—reason is that states with better gender equality have lower levels of both perceived and actual corruption.

This is certainly not to say that women are inherently less corrupt than men. However, the evidence shows that there is a correlation between greater proportions of women in governance and fewer instances of corruption. Research conducted by the Wilson Center found that women are more negatively impacted by corruption than men, are perceived as less corrupt, and can even help to reduce corruption by holding leadership and policymaking positions.

According to the World Bank, corruption has several negative implications for human prosperity. To name a few, it undermines government revenue, distorts decision-making connected with public investments, encourages illicit markets and crime, and worsens income distribution. As women make up “70 percent of the world’s poor and 65 of the world’s illiterate,” they are more vulnerable to corruption, as well as limited in their ability to fight against it. The GCPI does not include gender in its overarching analysis, but it does appear to recognize this correlation. On International Women’s Day, the GCPI released a report on the impact of land corruption on women in Africa, stating that land corruption increases gendered inequities, thus making women more vulnerable than men.

There is conflicting literature on public perceptions of female parliamentarians’ levels of corruption. While early literature seemed to agree that women were overarchingly viewed as less corrupt than men in politics, it now appears that this theory does not stand up over a broader range of cases. Some have stated that women in politics are more risk averse and held to higher standards than men, which effectively keeps them from engaging in corruption. Others propose that women have fewer chances to engage in corruption due to their status as outsiders in traditional relationships of patronage.

The Impact of Women in Parliament

The most tangible relationship between women and corruption is in the policies women support. Not only does the inclusion of women in politics lead to more lasting peace in post-conflict countries, but they also tend to favor policies that are good for development. Women are more likely than men to invest in issues such as education, health care, and human rights—all necessary investments to decrease poverty and corruption.

According to the National Democratic Institute (NDI), incorporating more women into systems of governance is both a potential antidote to statewide corruption and a critical component of inclusive democracies. NDI claims this is because women have been found to be more likely to reach across party lines and more responsive to constituent concerns. As a result, citizens’ confidence in democracy is increased.

*If you are interested in understanding women’s representation and getting a better sense of the data that are available on this topic, take a look at our National Action Plan Map!