Known as the “Mother of the Revolution,” Tawakkol Karman grew up in the midst of political turmoil, the civil war between North and South Yemen. As a young journalist in 2005, she founded Women Journalists without Chains to advocate for freedom of the press and provide training to new journalists. By 2007, her organization was reporting human rights abuses, including attacks against and unfair sentencing of journalists in Yemen, and she had begun to organize weekly protests against corruption and injustice. It was no surprise when, in 2011, Tawakkol Karman became a figurehead for the Arab Spring.

It is female activists like Karman who are on the front lines of peacebuilding worldwide. Women’s strategic and nonviolent leadership has been visible in movements such as the Women’s March and Black Lives Matter in the United States and in the struggle for immigrant rights, against repressive religious laws, and for political representation around the world. It is for this reason that, for this year’s International Day of Peace, Our Secure Future decided to celebrate those women peacebuilders and invite them to the table to share how they are mobilizing for peace using social media around the world.

This year’s International Day of Peace event, cosponsored by the United Nations Association Denver Chapter and Our Secure Future and hosted at the Sie Center, recognized the daily work that women peacebuilders do by raising awareness and mobilizing activism using social media. The purpose of the International Day of Peace, started in 1981 by the United Nations, is to “honour a cessation of hostilities” and commemorate nonviolence and peace globally.

With opening remarks by OSF’s director Sahana Dharmapuri, and moderated by Marie Berry, author of War, Women, and Power: From Violence to Mobilization in Rwanda and Bosnia-Herzegovina, the topic of the day was women’s ability to mobilize for peace using media.

Jamie Dobie is the executive director of Peace Is Loud. Jamie frequently speaks on how to use activist and impact strategies alongside Peace Is Loud’s documentary films. She believes in the power of storytelling to change the way we see one another and ourselves. Her recent public appearances include speaking at the International Documentary Association, the US Naval War College, the Fletcher School of Law and Diplomacy, the Youth Assembly at the United Nations, and the Women’s International League for Peace and Freedom’s centennial peace conference at The Hague.

Chantal Pierrat is the founder and CEO of Emerging Women. Her mission is to increase women’s leadership across the globe. Emerging Women is a global leadership and media platform that serves over 70,000 women worldwide.

Iman Jodeh is the executive director and founder of the locally based nonprofit Meet the Middle East (MTME), which fosters relationships between the United States and the Middle East through education and immersion travel. As a first-generation Palestinian American, Iman is fluent in Arabic and maintains a second home in Ramallah, Palestine. Using her background and education, she offers alternative travel opportunities for Americans to Palestine, Israel, Jordan, and Egypt that are otherwise unseen in the West. She also locally hosts cultural and educational programs through MTME for those unable to travel to ensure exposure to the Middle East. Entities ranging from children’s hospitals to the US District Attorney’s Office often call on her expertise to consult about the geopolitical situation of the Middle East or Islam. As the spokeswoman for the Colorado Muslim Society, Iman also plays a major role in representing Muslims on a variety of social justice areas statewide. She sits on the board of directors at the Colorado Interfaith Alliance and the Village Exchange Center, representing the Muslim community.

Pardis Mahdavi, PhD, is currently the acting dean of the Josef Korbel School of International Studies at the University of Denver. Before coming to Denver, she was at Pomona College from 2006 to 2017, where she most recently served as professor and chair of anthropology and director of the Pacific Basin Institute as well as Dean of Women. Her research interests include academic freedom, diversity and inclusion in higher education, gendered labor, human trafficking, migration, sexuality, human rights, youth culture, transnational feminism, and public health in the context of changing global and political structures. She has written and published four single-author books and one edited volume in addition to numerous journal and news articles. She has been a fellow at the Social Sciences Research Council, the American Council on Learned Societies, Google Ideas, and the Woodrow Wilson International Center for Scholars.

Key Takeaways from the Panelists 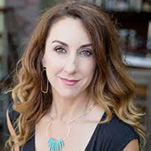 There is a need for more feminine and collaborative leadership and to start thinking about “we” instead of “I” as leaders. The time for patriarchy has ended. —Chantal Pierrat 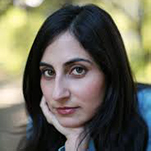 The women’s movement is constantly building upon itself. Whereas current initiatives, such as #MeToo, might stand out today, they come from a long history of similar initiatives and will continue to feed into the women’s movement of the future. Women have successfully launched campaigns like #MeToo in countries such as Afghanistan, Saudi Arabia, and Guatemala. —Pardis Mahdavi 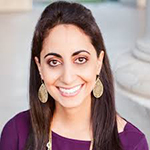 Women’s leadership is cross-cultural and uninhibited by culture. Women are leaders both in the West and in the East.—Iman Jodeh

Women are constantly being written out of history, and we need to share more stories of women and peace. Making films and using the media is one successful way to provide that counternarrative and to show what women peacebuilders are successfully doing around the world. —Jamie Dobie