As a guest blog, the views expressed in this publication do not necessarily reflect the views of Our Secure Future or One Earth Future.

Russia attacked Ukraine from multiple points of entry a few weeks ago, but it has already been a long war. Conflict in the Eastern Territories has taken a toll on the lives of Ukrainian children since 2014, when Russian separatists took control of the Donbas region. While the battle for control of Kyiv rages on, even among fierce resistance from civilians defending the city, the war is having a disproportionate effect on two groups in the crossfire – the old and the young.

Analyzing population dynamics by age and gender is an important part of the Women, Peace, and Security agenda, which considers how gender plays a role in conflict. Conducting a gender analysis of a conflict includes understanding how the negative effects of war impact men and women, and boys and girls within the civilian population. The United Nations reports that in the last few weeks, 2 million people have left the country as refugees. This figure is in addition to the already 1.5 million internally displaced people (IDPs) forced to leave their homes since 2014. While women and children are allowed to seek refuge in neighboring states such as Poland, men between the ages of 18 and 60 are being turned back at the border and encouraged to fight.

What will become of the families who are separated by the conflict? We know from previous wars in Europe, such as the war for the Former Yugoslavia in the Balkans, that separating men and women can lead to war crimes. Isolating people from their family network has severe, negative consequences for the civilian population. Men are more likely to be killed, imprisoned, or go missing. Women are more likely to suffer deprivation, harassment, and sexual violence. It can take years for separated families to be reunited. Children and young people who are no longer in school will be under psychological and social pressure to find something else to pass the time.

When I arrived in Kyiv in 2018, the taxi driver who drove me from the airport into town, said the only difference between the Ukrainian people is whether a person “looked East or looked West.” He meant that people either want to become part of Europe, including many young people, or they wanted to remain connected to Russia, which described older people living in the east who speak the Russian language. He looked like an average, middle-aged man. So, I asked him, “What about people like you?” He replied, “That’s easy. I work for a living. People like me know that we need both to survive.” Then he explained the importance of maintaining economic ties to Europe and Russia, for practical reasons. “It is simply a matter of geography,” he said.

That same choice is facing Ukraine’s children, where the long game of the present conflict will be borne out. Hundreds of schools along the border have closed since the conflict began, and one of the first casualties of the latest Russian incursion was a kindergarten hit by artillery fire. According to the Organization for Security and Cooperation in Europe (OSCE) Special Monitoring Mission to Ukraine, before the latest war there were already 670,000 school children in 1,727 schools in government-controlled areas under fire and another 1,815 schools in Russian controlled areas. Schools close to the contact line have a hard time staying open, and many have been damaged by shelling and indirect fire from the conflict: 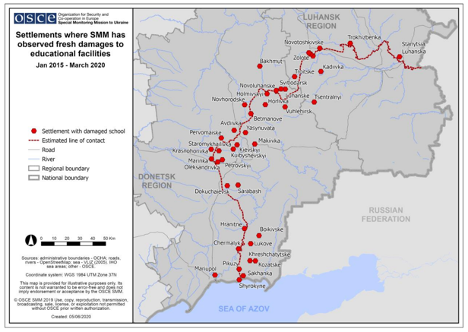 Source: OSCE Thematic Report on the Impact of the Conflict on Educational Facilities and Children’s Access to Education in Eastern Ukraine, July 2020.

The OSCE has documented damage to schools by both Ukrainian and Russian forces, who have used schools for shelter or to have fortified positions for force protection. Between 2015-2020, the OSCE confirmed damage to 93 educational facilities on both sides of the contact line. International organizations have regularly informed parties to the conflict that military presence within or near schools places the lives of children and teachers at-risk. Yet, even when the military abandons its position at a school, the structure is seldom repaired. In 2020, 109 schools were closed, and another 226 facilities were inoperable.

Russia has filled the gap in formal education by recruiting young men and women into militarized youth groups and other sponsored activities that lure them eastward. Winning the “hearts and minds” of Ukrainian youth in Donetsk is part of the strategic game that Russia is playing with Ukraine, and western leaders should pay attention. The Ukraine Alert reported that there were 48 patriotic-military clubs in the Donetsk region as of 2018. Many of the clubs in the Eastern Territories have comparable clubs in Russia that engage in non-military activities like educational tourism and social trips to Moscow. 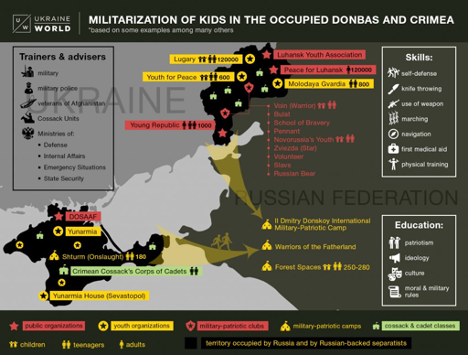 Human rights groups have reported that more than 5,000 children in the occupied territories have been through paramilitary camps, where young men are taught soldier skills such as how to handle weapons, and young women are encouraged to recruit young men. In Donetsk, young girls are reportedly guarded by Russian police officers, as they hand out pamphlets encouraging male prospects to defend their homeland against Ukraine. One youth quad logo shows red high heels, an AK-47 and a rose: 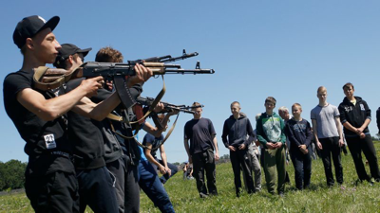 Schoolchildren watch classmates training how to use a weapon as part of their patriotic training in Donetsk. Source: Euractive and Agence France Press, Photo by Alexander Ermochenko, May 2018

One of these youth groups, known as the Yunarmia -- the “Young Guard,” is said to have at least a thousand members in the Eastern Territories. Human rights organizations such as the Kharkiv Human Rights Protection Group have pointed out that, “under the guise of ‘military-patriotic education,” children and young adults are being indoctrinated with anti-Ukrainian propaganda.”

Although the root cause of the conflict in Ukraine has been described as a test of wills between NATO and non-NATO nations, the will to fight Russian influence has important cultural and social dynamics (including arguments over the official language). Russia knows that the battle for control starts before a war begins and continues after conventional warfare ends. It is a long game.

Sarah Dawn Petrin is a nonresident senior fellow with the Atlantic Council’s Transatlantic Security Initiative in the Scowcroft Center for Strategy and Security and a former advisor to the U.S. military and NATO on developing strategy, policy, and doctrine for the Protection of Civilians and Women, Peace and Security. She has 20 years of operational experience in conflict zones in Africa, Asia, Eastern Europe, and the Middle East. She is the author of a Military Leadership Guide on Human Security and author of the book Bring Rain: Helping Humanity in Crisis.

This article includes unpublished material from the Military Leadership Reference Guide on Human Security, Case Study on Children and Armed Conflict written for the U.S. Army Peacekeeping and Stability Operations Institute (PKSOI) in 2021.